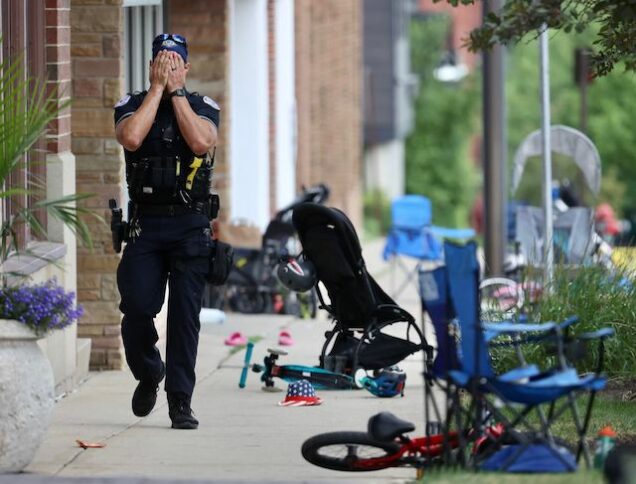 Six people were killed and at least two dozen injured when a white male with a high-powered rifle opened fire from a rooftop at a Fourth of July parade in the wealthy Chicago suburb of Highland Park on Monday.

The shooter turned a civic display of patriotism into a scene of panicked mayhem.

Officials told a news conference that six people were killed and 24 taken to hospital, and that a rifle was recovered from the scene. A hospital spokesperson reported 31 people were injured.

Police said they were searching for a white male about 18 to 20 years old and asked the public for tips and cellphone images and surveillance video to help find him.

“We are aggressively looking for the individual responsible,” sheriff’s department spokesperson Christopher Covelli told journalists. “He could be in the city; he could be somewhere else.”

The shooting comes with gun violence fresh on the minds of many Americans, after a massacre on May 24 killed 19 school children and two teachers at an elementary school in Uvalde, Texas.

It also came after the May 14 attack that killed 10 people at a grocery store in Buffalo, New York.

“Jill and I are shocked by the senseless gun violence that has yet again brought grief to an American community on this Independence Day,” U.S. President Joe Biden said in a statement.

“I have spoken to Governor Pritzker and Mayor Rotering, and have offered the full support of the Federal government to their communities. I also urged Federal law enforcement to assist in the urgent search for the shooter.”

“The vast majority suffered gunshot wounds. Remaining individuals sustained injuries as a result of chaos at the parade,” Anthony said.

Children waving American flags, riding tricycles or enjoying a ride in a wagon pulled by adults froze as people in the crowd screamed while gun shots rang out, according to a video posted on social media.

One cellphone video, seen but not verified by Reuters, recorded what sounded to be about 30 rapid shots, a pause, and then another roughly 30 shots.

Between the two bursts, a woman can be heard saying from the side of the parade route: “My God, what happened?”

Witness Amarani Garcia, who was at the parade with her young daughter, told the local ABC affiliate she heard gunfire nearby, then a pause for what she suspected was reloading, and then more shots again.

There were “people screaming and running. It was just really traumatizing,” Garcia said. “I was very terrified. I hid with my daughter actually in a little store. It just makes me feel like we’re not safe anymore.”

Social media video showed a marching band in the parade suddenly breaking formation and running away, and other images of people leaving their belongings behind as they sought safety.

“Everyone was running, hiding and screaming,” said CBS 2 Digital Producer Elyssa Kaufman, who was at the scene, the channel’s website reported.

“It sounded like a string of about 20 firecrackers that were let off inside of your mental garbage bin, it was that loud,” Jeff Leon, 57, told CNN, estimating the gunfire lasted less than a minute. “So, I didn’t immediately react, I thought it was just how people are on the fourth.”

The shooting is likely to rekindle the American debate about gun control, and whether stricter measure can prevent mass shootings that happen so frequently in the United States.

“Grief will not bring the victims back, and prayers alone will not put a stop to the terror of rampant gun violence in our country,” Illinois Governor J.B. Pritzker said. “I will stand firm with Illinoisans and Americans: we must – and we will – end this plague of gun violence.”