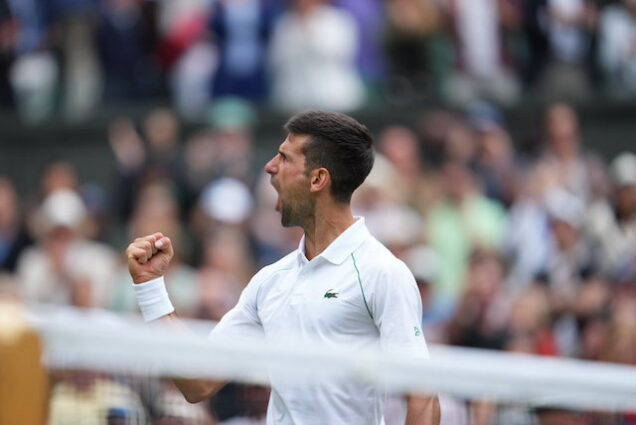 Novak Djokovic survived a Jannik Sinner scare in the Wimbledon quarter-final on Tuesday when he came back from two sets down to beat the Italian 5-7 2-6 6-3 6-2 6-2.

The Serbian top seed appeared to be in trouble against the inspired 20-year-old after being outplayed for two sets. But he stormed back to win and be on course for a fourth successive Wimbledon title.

There was an air of inevitability about the outcome as the battle-hardened 35-year-old seized control to reach his 43rd Grand Slam semi-final and 11th at Wimbledon.

He also extended an unbeaten run at Wimbledon that goes back to 2017 and now stands at 26 matches.

Djokovic has not added to his 20 major titles this year after being deported before the Australian Open following a COVID-19 standoff and then losing to old adversary Rafa Nadal in the quarter-finals of the French Open.

But he kept alive the prospect of facing the second-seeded Spaniard in Sunday’s final with a superb comeback, the seventh time in his career he has triumphed after losing the first two sets.

After taking the acclaim of the crowd on Centre Court, Djokovic explained how he had turned it around.

“The first two sets compared to the last three was like two different matches,” Djokovic, who is now joint second all-time with Jimmy Connors on 83 Wimbledon match wins, said on court.

“He (Sinner) was the better player for two sets, then I went out and had a toilet break and had a little pep talk with myself in the mirror, it’s actually true. Sometimes when not much positive is happening these things are necessary.

“I broke early in the third set and that gave me a confidence boost and I saw a little doubt in him.”

Sinner, the 10th seed, had looked set for the biggest win of his career to follow in the footsteps of compatriot Matteo Berrettini who reached last year’s final.

But once Djokovic’s onslaught began he faded.

When Djokovic produced a miraculous backhand winner on the slide to earn a break in the seventh game of the fifth set, ending on his belly in a superman posture, Sinner knew that he was facing mission impossible.

The Italian belted a volley long on the next point and then Djokovic held to love to seal victory and set up a clash with either David Goffin or British hope Cameron Norrie.