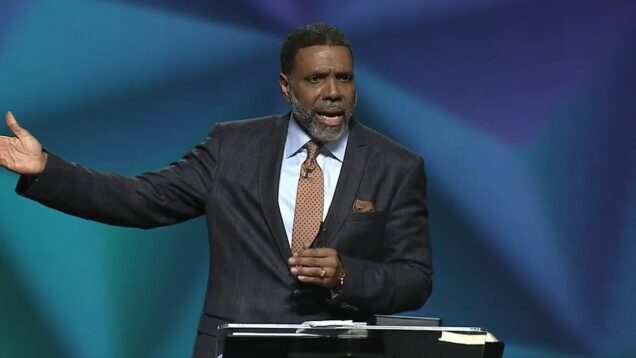 American preacher Creflo Dollar has been criticized by other preachers after he preached against tithing.

Dollar who has been an advocate of tithing also urged his congregation to do away with books, tapes, and videos he made on the topic.

The prosperity preacher admitted he’s been preaching the wrong gospel when it comes to tithes, stressing that tithing is Old Testament teaching and no longer relevant for New Testament believers.

Dollar who stated this during one of his Sunday sermons titled, “The Great Misunderstanding” cited Romans 6: 14 in the Holy Bible to buttress how Christians now live under grace and not the laws of the Old Testament.

Romans 6: 14: “For sin shall not have dominion over you; for ye are not under the law, but under the grace” You are under grace not under laws, he noted.

He, however, told his congregants that he’s not suggesting that Christians should water down their act of giving while saying tithing is an old testament thing.

Watch the full video of Creflo Dollar’s U-turn on tithing below:

Dollar is changing direction, doing a 180 in his trajectory of thought, years after he took fire for asking his parishioners to donate $300 each so he could buy a $65 million Gulfstream G650 jet for doing ministry abroad.

As noted by CNN, the jet “comes with two Rolls-Royce engines, high-speed Internet and two multichannel satellites and allows for a four-and-a-half-hour commute from New York to Los Angeles.”

In Dollar’s ministry, he uses a term called “Honor Giving” which is akin to tithing, the Washington Post reports.

Many have accused Creflo of enriching himself “on the backs of credulous, lower-income worshippers.”

However, Pastor Michael Clayton Harris of the First Baptist Church of Passtown is not here for Creflo’s “new” revelation and took to Facebook to call him out.

“Until #CrefloDollar has a “Zaccheus” spirit which involves giving the people a REFUND for all the tapes, videos, books, and other materials they bought from him, I am not moved by his “new” revelation on tithing that is still flawed. It’s flawed because #JesusChrist used the “law” in His teachings. For example: In Matthew 4:4,7, & 10, whenever Jesus said, “It is written…” that was the law being used to combat the temptations of the devil. #SoundDoctrine #StudyToShowThyselfApproved”

He said “They quote Bible upside down, that’s why you have to be a Bible student, even a pastor can deceive you, please read Bible for yourself.

“So that somebody cannot preach something up-side-down and you believe. All manner of things are everywhere, some people preach tithe and they said no more tithe because they did not have a solid foundation in the Bible and some of you believe it.

“What’s my business, didn’t I read my Bible? Follow anything you like, you too, read Bible for yourself, let nobody deceive you.

“I don’t need you to preach to me, I will pay tithes till I die.

“I’ve read it from the Bible, if another said grace made it, let him stay there. You can turn the Bible upside down, please don’t follow all manner of doctrines. Read Bible, God gave it to you. Pastors can go astray. I learned all manner of the gospel are in town. Any man can change any day.”

Some members of the Christian communities on Facebook have also asked Dollar to refund all the tithes he has received.

One Facebook user wrote: “I do not care what you now believe, Creflo Dollar refund the tithe you have received.”