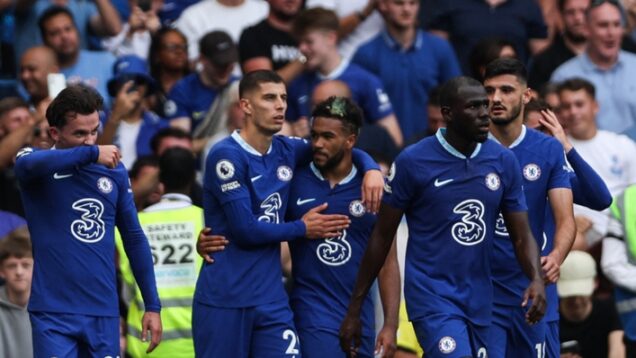 Kai Havertz came off the bench to seal a much-needed victory for Chelsea at Stamford Bridge, as the Blues came from behind to beat London rivals West Ham 2-1.

Thomas Tuchel’s team were booed off after failing to manage a single shot on target in a dismal first half and fell behind shortly after the hour when Antonio converted following a goalmouth scramble.

But Ben Chilwell poked past Lukasz Fabianski to level the scores with 15 minutes remaining, and Havertz was on hand to turn the full-back’s cross home to put the Blues ahead late on.

There was still time for Maxwel Cornet to see a fine strike disallowed for West Ham, but Chelsea ultimately held on to bounce back from Tuesday’s loss to Southampton after an enthralling match.

Chelsea needed 27 minutes to register a shot during a drab first-half performance as Christian Pulisic’s effort deflected away, before Mateo Kovacic drilled a 25-yard effort wide.

That was the sum of the Blues’ efforts before the break, however, and West Ham almost hit the front on the hour when Edouard Mendy palmed Jarrod Bowen’s volley wide.

Mendy was helpless to prevent Chelsea from falling behind from the subsequent corner; with the Senegal international rooted, Antonio poked home from Declan Rice’s cutback, sending the travelling fans wild.

But Chelsea levelled things up with a quarter of an hour remaining, as Chilwell brought down Thiago Silva’s high ball to finish beyond Fabianski, before Cornet nodded against the post as West Ham looked for a second.

Chilwell then turned provider with 87 minutes on the clock, getting to the byline before firing a low cross into Havertz, who converted to put the Blues in the ascendency.

Chelsea had to survive one final scare, however, as Cornet saw a fierce right-footed finish ruled out after Bowen was adjudged to have fouled Mendy.