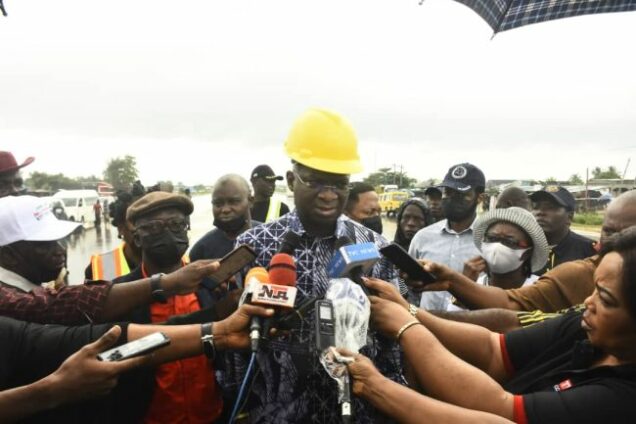 The Minister of Works and Housing, Mr Babatunde Fashola, has directed Kopek Construction Ltd., the contractor handling the construction of 108 kilometres Ibadan – Ife – Ilesa road project to reduce the inconveniences being experienced by motorists and travellers.

Fashola, while on an inspection tour of the road and other road projects in Oyo State, on Friday evening, also directed the contractor to do some palliative works on the bad sections of the road.

The minister, who led other Directors in the ministries on the tour, also inspected the 52 kilometres Oyo – Ogbomoso dual carriageway, as well as the 28 kilometres Iseyin – Okeho Road projects.

Fashola expressed concern over the gridlock on some sections of Ibadan – Ife- Ilesa Road, such as new Gbagi, Alakia Adegbayi, Celica and Tollgate areas.

He, therefore, directed the contractor to urgently carry out palliative works on the sections and other areas that call for such urgent intervention.

The minister, also a former Governor of Lagos State, said since the end of the year movement would soon start, there was a need for the contractor to ensure that the sections of the road were motorable.

He said that the Federal Government’s commitment to reconstruct the road and other roads across the country made it “to award Ibadan-Ife Road.

“Though, we have awarded this contract before, a small budgetary provision made it impossible to do any work then.

“Now that the contractor has been mobilised, work has started and we intend to keep the construction firm,” Fashola said.

He expressed satisfaction with the progress of work on the road that links Oyo State to Osun, saying that impact of SUKUK fund had been felt on the execution of the project.

The minister urged the contractor not to stop work, promising that he would consider the firm for another SUKUK allocation.

“We have started a process for new SUKUK and your firm will certainly be included.

“If there’s any funds that are unused at the end of the SUKUK review period, clearly not everybody has fully utilised their own, so this road will come up for consideration, but don’t stop work,” he said.

On Oyo – Ogbomoso Road, the minister said the project was now fully supported by the NNPC Tax Credit, attributing this to the progress being recorded on the project.

Fashola said that the contractor -Reynoid Construction Company (RCC), should not have any problem delaying the completion of the project with the availability of funds now.

On the project completion stage, the minister said RCC had completed 30 kilometres of bidders of the 52 kilometres road, which represents 56 per cent completion.

“Earthwork is still being done, but earthwork has to slow down during raining season for obvious reasons.

“To avoid laterites being filled from getting washed away, RCC has to wait for the rain to subside so that the earth can solidify a little bit.

“We expect that by November 2023, the work would be completed fully and relief would come to Oyo and Ogbomoso Towns since all the heavy trucks will come through the new road instead of going through the two towns and the gridlock and accident that used to happen will become history,” he said.

Fashola further disclosed that the government was planning to go back to the old road and rehabilitate it for the use of the people of Ogbomoso and Oyo, after the completion of the new road.

At Okeho, hundreds of residents came out with excitement to receive the minister in appreciation for the ongoing 28 kilometres Federal Government road project that links the agrarian town to Iseyin.

Fashola described the area as an agricultural treasure of the Western part of Nigeria, “a prolific food basket resort”.

According to him, so, this road is not just a road but is one of the routes that you will see roads to the farm areas on our national map whether, in the East or North, this is the one in the Western part of Nigeria.

“It is 28 kilometres road, it had been abandoned before this administration came into office, so we terminated the contract and re-awarded it to a local engineering construction firm – HMF Construction Company Ltd.”

He said that the project being funded by SUKUK has covered 10 kilometres with asphalt, adding that the construction company was trying to realign the road on the remaining kilometres.

According to him, two new bridges were constructed and laterite, stone base and asphalt will be used on the entire 28 kilometres road length.

He said that the project would be completed, in earnest adding, “the contractor said he can deliver the road by February 2023, subject to payment of N4 billion, those are the issues going into the 2023 budget.

“For example, those are the issues that I think should agitate representative of this constituency to ensure that there is enough budgetary provision.

“The contractor is able; we are willing and we are hopeful that when 2022 SUKUK is also being considered we will be able to accommodate some of these things.”

“That is the purpose for Executive Order Seven; the local content and local contractors’ participation, the more you do, the better you get.

“If we don’t give them the opportunity they can’t acquire the experience and equipment,”
he said.

Fashola urged Nigerians to use the infrastructure provided by the government.

Feghali informed the minister that his firm had finished the N2 billion allocated for the project from the SUKUK fund.

He urged the Federal Government to consider the project for another SUKUK allocation to enable his firm to progress on the job.