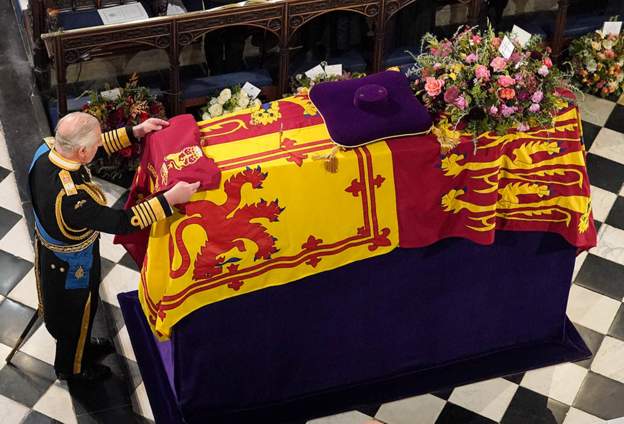 The remains of the Queen

The coffin of Queen Elizabeth II has been lowered into the royal vault ahead of her burial later in a private family service.

The Dean is reading a psalm and the commendation.

The Garter King of Arms then pronounces the Queen’s styles and titles – the different names by which she was known during her reign.

He reads: “Thus it hath pleased almighty God to take out of this transitory life unto his divine mercy the late most high, most mighty, and most excellent monarch, Elizabeth the second, by the grace of God of the United Kingdom of Great Britain and Northern Ireland and of her other realms and territories Queen, Head of the Commonwealth, defender of the faith, and sovereign of the most noble order of the garter.”

The Queen’s piper then plays a lament from the North Quire Aisle.

The Archbishop of Canterbury, Justin Welby has his first part in the service, where he read the blessing, beginning to bring the service to a close.

The congregation and choir remained standing, as they sang the first verse of God Save The King.

King Charles is seen biting his lip and closing his eyes as they did so.

The service end and by 19:30 this evening, the King and his relatives will return to the chapel for the Queen’s burial.

She will be interred next to her late husband, the Duke of Edinburgh.