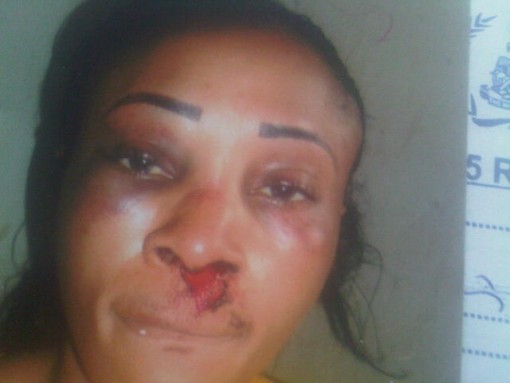 BLOODIED NOSE... Obasuyi Abimbola, a landlady battered by her female tenant in Lagos

A landlady, Obasuyi Abimbola, has been battered by her female tenant, Mujidat Ibrahim, for allegedly barring her from selling a narcotic substance suspected to be marijuana in her compound in Lagos State, western Nigeria.

Following the assault, the suspect, Mujidat was arrested and charged before Isolo Magistrates’ court with the alleged offence.

The incident happened at 37, Adigun street, Itire where both the landlady and tenant reside.

According to Abimbola, her trouble started after she got information that Mujidat and her husband, Kaka were selling marijuana.

She said with confirmation from other tenants, she moved in and directed them to stop it forthwith and threatened to eject them and report to the police.

According to her, that did not augur well with the husband and wife who challenged her to mind her business.

She said that led to exchange of words and in the process resulted in the suspects allegedly attacking her.

During the fight, Abimbola alleged that Mujidat’s husband allegedly held her and his wife rained blows on her.

She said she was badly injured and bled profusely.

She was taken to a nearby hospital where she was treated before being taken to the General Hospital.

The matter was reported to the police at Itire division and Mujidat was arrested while her husband reportedly escaped.

At the station, Mujidat denied that they were selling marijuana.

Her husband reportedly refused to show up at the station for fear that he would be detained.

Mujidat was charged to court with assault occasioning bodily harm under the Criminal Code.

She pleaded not guilty and the prosecutor, Inspector Abass Abayomi, informed the court that the victim was seriously injured and was still lying critically ill at the hospital.

The presiding Magistrate, Mrs. A. O. Adedayo granted Mujidat bail in the sum of N20,000 with one surety who must show evidence of payment of tax.

Mujidat was remanded in prison custody pending when she will perfect her bail condition.

The matter was adjourned till 8 February, 2016.