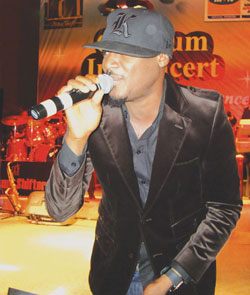 Tu Face recently recorded a celebratory song in London with other artistes. The song, whichÂ  is targeted at raising excitement for the golden jubilee celebration of Nigeriaâ€™sÂ  independence, is titled Celebration, produced by Ozzie and Mo Eazy and recorded by 2FaceÂ  along with UK-based artiste, King David.

Celebration will be available for sale by digital download on iTunes,Â  Amazon,Â www.notjustok.com and MTN.

According to investigation, 100 per cent of the proceeds of sale of the album will go toÂ  Little Big Souls, a charity that focuses on the well-being of children born prematurely.

While several artistes wait to be commissioned by government or its agencies, 2Face has goneÂ  a step ahead of his contemporaries to record the song which aims to delight at the 50thÂ  anniversary celebration of Nigeriaâ€™s independence.

However, more than celebrating blindly, he has managed to tie in the less privileged in theÂ  society, a move which proves his love for his country and fellowman. This is one of 2Faceâ€™sÂ  many humanitarian efforts to aid the underprivileged.

Last year, he headlined a concert for the Ghana launch of Little Big Souls in Accra. He hasÂ  been known to lend his support repeatedly to such initiatives without reserve and calls onÂ  allÂ NigeriansÂ and friends of NigeriaÂ to support this worthy cause.

Without any doubt, the most accomplished artiste of his generation, 2Face Idibia, put outÂ  his first recording Body & Soul as a member of the trio, Plantashun Boiz, in 1999. Ten yearsÂ  later, having gone through more ups and downs to panic even a seasoned stockbroker, theÂ  artiste has emerged a newer, stronger brand, winning several awards for his latest effort,Â  Unstoppable.