Only Borno government will comment on missing school girls - DHQ 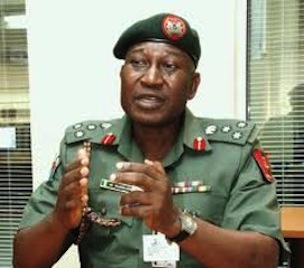 The Defence Headquarters (DHQ) said it has streamlined the dissemination of information on the abducted schoolgirls in Chibok, Borno, stating that progress report would henceforth be handled by Borno government.

Major-General Chris Olukolade, Director of Defence Information, made this disclosure in Abuja while briefing journalists.

He said that in view of the need to provide daily update on the search of the abducted girls, the DHQ had directed that henceforth, progress reports be handled by Borno government.

He added that the security forces on ground in the state had been directed to coordinate with the state government and provide them with necessary information on the search for the girls.

The director noted that: “Accordingly, security agencies on ground in Borno will continue to interact and support the state government officials in their efforts to inform the public on the Chibok incident and progress in the search without any prejudice.

“The Nigerian Armed Forces understand and appreciate the concerns being shown by all citizens in and out of the country on the unfortunate incident of abduction of the female students.

“Alongside the search for the girls, the military is currently committed to various security operations in most parts of northern Nigeria.

“Troops have been deployed in forests and mountains combating terrorists and armed gangs of various descriptions.”

Olukolade reaffirmed the military’s unflinching resolve to continue to discharge its responsibility of defending the territorial integrity and people of Nigeria in the most professional manner.

According to him, the resolve will also apply in the search for the missing girls which is ongoing concurrently along with other security operations nationwide.

He explained that a lot of information had been received in the efforts to secure the freedom of the girls.

Olukolade noted that the armed forces were giving all Nigerians the assurance that it would continue to appraise all information received during operations.

“Unfortunately however, most of the information, some of which mischievously publicised for sensational reasons, have turned out to be spurious and of no operational use.

“Disturbingly, some of them have been mischievously publicised with a view to heightening tension and inflicting more pain on the nation as envisaged by the terrorists.

“Nevertheless, the forces will remain disposed to receiving, analysing and applying all relevant information on this issue.”

Olukolade said that the military would not relent in its efforts to search for the students, adding that the armed forces were mindful of the fact that some of the information might be outdated.

He noted that such information was actually a ploy to distract it from its goal of dealing with terrorism and other violent crimes aimed at crippling the nation.

He said that the military’s efforts at recovering the girls would continue.

In addition, the Commissioner for Education in Borno, who had been issuing regular updates on the incident, was enjoined to continue in order to satisfy the necessity for information flow.

“The Borno State Government, in whose facility the incident occurred, is appropriately placed to continue with regular briefing as the Commissioner for Education has been doing.

“This is in line with best practice in other climes; more so as all agencies of every tier of government are expected to continue to function in the state.

“The Nigerian military always subscribe to the importance of information flow to the public and will continue to sustain this policy in all its internal security operations.”

It would be recalled that the girls were abducted from their school in Chibok by suspected militants more than two weeks ago.