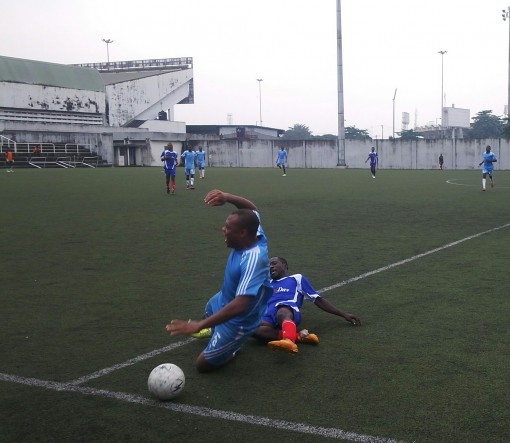 Action during the semi final match between Complete Sports and SportsDay played at the Legacy Pitch of the National Stadium, Lagos at the Lagos NUJ Media Games on Friday.

The battle for football supremacy at the 10th edition of Lagos NUJ Media Games will be between Lagos Information and Complete Sports on Saturday, 12 September.

The football team of Lagos State Ministry of Information defeated Daar Communications 5-3 on penalties after playing a 2-2 draw in a tension soaked first semi-final match played at the Legacy Pitch of the National Stadium, Surulere on Friday.

In the other semi-final clash, Complete Sports ensured that their first half strike stopped the ambition of hard fighting SportsDay from playing in Saturday’s final in the second semi final cracker.

The football final which will be played from 4:00 pm Saturday will be proceeded by the third place match between Daar Communications and SportsDay.

Earlier on Saturday by 7:00 am, the marathon race which took off at Costain area of the state and terminated inside the National Stadium was more fun than a competition, similarly, the media outfits engaged in a tug of war.

No fewer than 47 media houses (both in print and electronic) participated in the tournament sponsored by Med-View airlines.