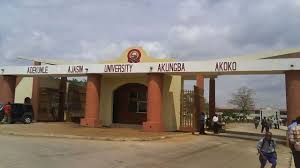 The Adekunle Ajasin University, Akungba-Akoko (AAUA) on Friday graduated 31 students with first class degrees, out of its 5, 252 graduands in the 2016/2017 academic session.

Prof. Igbekele Ajibefun, Vice Chancellor of AAUA stated this at the 8th convocation of the school in Akungba-Akoko.

Ajibefun said that out of the 5, 252 graduands, 5, 101 were conferred with first degrees, 39 received Master’s Degrees,108 bagged Postgraduate Diplomas and four earned Doctor of Philosophy (Ph.D) degrees.

“Of the 5, 101 that were conferred with first degrees, 31 earned first class, 1, 132 bagged second class upper division, while 3, 143 received second class lower division, 773 graduated with third class, while 22 had pass degrees,’’ he said.

The News Agency of Nigeria (NAN) reports that cash prizes of N100, 000 were awarded to best graduating students from the various faculties,
with Komolafe Olorunwa, of the Department of Integrated Science Education, with a Cumulative GPA of 4.74, emerging the overall winner, with a cash prize of N150, 000.

Ajibefun said that the university sponsored 207 academic and non-teaching staff on local and international trainings and conferences from 2016 to-date.

He revealed that a total of 20 young academics benefitted from the TETFund postgraduate sponsorship in different universities across the globe, while 25 others were sponsored to international and local conferences last year.

Later, Gov. Oluwarotimi Akeredolu of Ondo State at the event that he was happy with the recent improvement in the ranking of the institution by an international body from its former 31st position to the 18th.

Akeredolu also appealed to indigenes of the state to help build education, especially at the tertiary level.

He also appreciated the student union government of the school for the relative peace being enjoyed in the school.

The governor thanked the governing board of the school for taking a special interest in the physically-challenged students by slashing their tuition fees by 50 per cent.

An honourary Doctor of Law degree award was conferred on Mrs Siju Iluyomade, the founder of Arise Women Foundation.

Iluyomade, in her acceptance speech, thanked the university for the recognition and announced free healthcare for all students of the university.