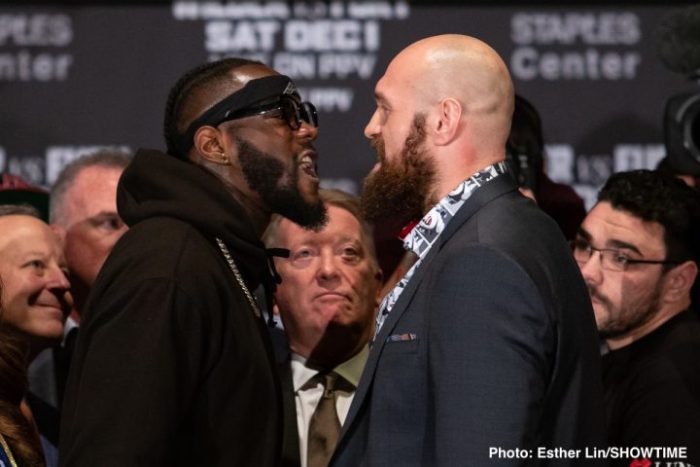 Tyson Fury (27-0, 19 KOs) lost his cool completely and ripped off his shirt looking to throw blows at Deontay Wilder (40-0, 39 KOs) at the final press conference on Wednesday.

Thankfully, no one was seriously hurt, but the two teams were pushing back and forth, and there might have been some punching involved. Goodness knows, they could have used a little more security. It didn’t appear there was any security in sight.

Boxing News 24 reports that before things fell apart completely, Fury was looking like he was afraid. There was fear written all over him. He just seemed afraid from all the loud talking from Wilder, and he couldn’t look the Bronze Bomber in the eye. When Fury ripped his shirt off to reveal a still flabby looking body, it had the opposite effect. Wilder looking like he wanted to tear Fury limb from limb when he started standing up on his hind legs like he was going to start throwing blows.

It was seemingly harmless trash talk from Wilder, but Fury seemed to come unglued from the mean talk from the WBC heavyweight champion. Fury’s promoter Frank Warren got involved, and things just deteriorated from there. Once Warren started talking, Fury got his back up and looked like he was ready to get froggish. It looked like Wilder hit Fury’s last nerve and shamed him into showing some courage. Before Fury ripped off his shirt, he was getting royally worked over by Wilder, who was talking a mile a minute in describing how he’s going to beat the daylights out of him on Saturday night.

It’s still unclear why Fury ripped shirt off. He was a mile away from Wilder at the time, and there was at least eight people in front of him to keep Wilder off of him. It’s not as if Wilder was going to jump over the tops of all those people to start landing his windmill power shots.

“I’m injury free. I’m just here to do a job and enjoy myself,” Fury said. “I’ve been looking for a man to knock me out for years and nobody done it.”

Fury is up against it on Saturday night. He’s going to be at his best in the early rounds, but if it goes into the second half of the contest, Fury is going to wind down like an old clock at be at the mercy of Wilder’s powerful right hand. Fury looked awfully tired in the later rounds in his last fight against the light hitting former two time heavyweight world title challenge Francesco Pianeta. If Fury is still around in the second half of the fight on Saturday, he’s going to need a lot of help to get him to the finish line. His form is going to deteriorate completely once it gets late. You can expect a lot of rabbit punches, holding and ugly mauling from Fury. That’s what he was doing against Wladimir Klitschko in the later rounds of their fight in 2015. For some reason, Fury’s boxing fans have lionized him from that performance, believing that it was a stylish performance from him. The reality is far different.

Fury was a tired heap in the later rounds against Klitschko, and he was mauling the equally tired former 1996 Olympic gold medalist like no tomorrow. The referee was just there in body only, watching the mauling without stepping in to take points off for the rabbit punching. If Saturday’s fight descends into same madness of the Klitschko fight, it’s going to be a mess. Wilder isn’t going to want to put up with it, and he’ll like reach back and nail Fury with his best right hand to try and end matters.

“I’m gonna beat his a– and then knock him out,” Wilder said. “I will knock Tyson Fury out. America got the baddest man on the planet.”

So there it is from Wilder. “America got the baddest man on the planet.” Not much you can say about that It’s going to be up to Fury to try and prove otherwise on Saturday night, since Anthony Joshua apparently doesn’t want any from the Bronze Bomber. What Wilder doesn’t realize is he punches so hard that he rarely gets a chance to beat up his opponents. They usually hit the deck quickly once he connects with one of his big power shots. Unless Fury is able to take his best fight hands, this fight could be over with early on Saturday night at the Staples Center in Los Angeles, California. The best advice yo can give to Fury is to start brawling as early as possible.

“I can’t wait! I can’t wait,” Deontay said. “There’s only three days left. Can you feel the energy? The two best heavyweights in the world. You all should be excited. This is a moment I’ve been waiting for my entire career,” Wilder said.